The Andromeda Galaxy is a barred spiral galaxy at a distance of about 2.5 million light-years and the closest spiral galaxy to the Milky Way. It’s part of the Local Galaxy group with a diameter of about 220 000 ly; it’s the largest galaxy in the group. 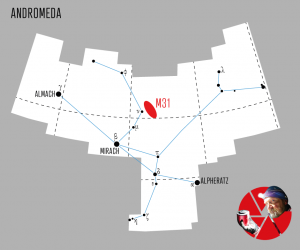 hemisphere. The Andromeda Galaxy has a large distribution in the sky, with a width of about six times that of the full moon. That means that you don’t need a long focal length of your scope. The effective focal length I used in these images is 523 mm with an APS-C-sized sensor, and the galaxy covers all of the image frame.

I collected two hour’s worth of data for this image (24×300 seconds) from a Bortle 1-2 night sky south of Muddus national park in the Arctic part of Swedish Lapland. I used the ZWO ASI 2600MC pro OSC camera at gain 100. It was a beautiful evening with a temperature around -20°C and some northern light playing around on the sky as well.

Andromeda Galaxy is a large and relatively light object. Nevertheless, there are always some challenges.

Focus: I can not stress enough the importance of accurate focus. After the polar alignment, I point the telescope on a bright star, such as Dubhe in constellation Ursa Major or Capella in constellation Auriga, and focus manually with a bahtinov mask.
I also use a ZWO EAF with an autofocus function in the ASI AIR app that checks the focus every 30 minutes. Without the EAF, I would recommend checking the focus regularly during the session.

Dark sky: A dark sky is a very large advantage, especially when shooting with an OSC. From a Bortle 1-2 sky, you can collect a lot more high-quality light in a shorter time compared to shoot from a heavy light-polluted sky.

Post Processing: When you have collected your data, it’s time to process all files. In this version, I have stacked all light frames with dark, flat, and bias frames to create a master fits-file. I then continue to process the master file and remove gradients, calibrate star colors, and making some contrast and color adjustments before exporting to a 16-bits tiff file in ProPhotoRGB.
In the next step, I upscaled the tiff-file with the help of Topaz Gigapixel. This process removes some noise and makes the image sharper with more detail. I then make some color adjustments in Adobe Photoshop.
I increased the blue saturation in the arms and the magenta to highlight ha-areas. Then I do curve adjustment to improve both overall contrast and contrast between light- and dust areas in the galaxy.
When I feel that it’s enough, I downsample the image to the resolution I want and then add some sharpness with Topaz labs. If I intend to publish the image on the Webb, I save it as a png- och jpeg file in sRGB.

Below: Some of the astrophotography locations I use in Swedish Lapland

A slightly different version based on this data was one of the winners in the Swedish National Space Agency astrophotography contest 2021.

In the Video below I show how I did the processing of that version in StarTools. It’s slightly different from the version I did in AstroPixelProcessor.

Melotte 15, the central part of the Heart Nebula p

The Eastern Veil Nebula, part of the Cygnus Loop.

As an astrophotographer near the Arctic Circle, th

Beautiful target in the sky. The Great Globular cl

Pelican nebula in HSO. Photographed with the ZWO 1

Orion, the mighty hunter of the winter sky, on the

M51 galaxy shot with the sky-watcher 190MN and ZWO

Triangulum galaxy M33 shot from a bortle 1 spot in

The dark season starts with a new version of the h

Shooting the Iris nebula last weekend and got some

In the old nordic folklore, the Northern Light was

This website uses cookies to improve your experience while you navigate through the website. Out of these, the cookies that are categorized as necessary are stored on your browser as they are essential for the working of basic functionalities of the website. We also use third-party cookies that help us analyze and understand how you use this website. These cookies will be stored in your browser only with your consent. You also have the option to opt-out of these cookies. But opting out of some of these cookies may affect your browsing experience.
Necessary Always Enabled
Necessary cookies are absolutely essential for the website to function properly. This category only includes cookies that ensures basic functionalities and security features of the website. These cookies do not store any personal information.
Non-necessary
Any cookies that may not be particularly necessary for the website to function and is used specifically to collect user personal data via analytics, ads, other embedded contents are termed as non-necessary cookies. It is mandatory to procure user consent prior to running these cookies on your website.
SAVE & ACCEPT