Learn how to shoot Starscapes

Starscape photography is the art to create landscape images where the night-sky has a prominent role.

There are some challenges when you aim to create a starscape. First, it’s a typical low light situation, so you have to use a tripod and understand the relationship between shutter speed, aperture, and sensitivity. There are also astronomical phenomena that are very obvious: the rotation of the earth around its axis.
We will look at one of the most common objects to incorporate in a starscape: our own Milky Way galaxy.

Milky Way is a rather large barred shaped spiral galaxy made up of approximately 100 billion stars. Together they form a large disk with a diameter of about 100 000 light-years. Our own solar system is located around 25 000 light-years from the galaxy’s center on the galaxy Orion-arm’s inner edge. The almost countless number of stars in the center of the galaxy forms av bulge, and in the very center, there is substantial evidence for the existence of a supermassive black hole corresponding to the intense radio source Sagittarius A.

In areas with little light pollution during dark nights, we can observe some aspects of this impressive object that we are part of, as a faint band of light that stretches over the dark sky. With a digital camera, a tripod, knowledge, and patience, you can create stunning starscape images with the Milky Way. So how do you do?

Camera: I recommend to use a DSLR or mirrorless camera with interchangeable lenses

Tripod: Because you will use long shutter speeds

Star-tracker: Optional, but it makes it possible to extend shutter-speed before you get star trailing.

I will also mention the concept of stacking since it’s an important method in all astrophotography. Stacking is a method to get a better signal-to-noise ratio and hence reduce noise and helps you to get more information out of the image files. I will not get into detail here, and for starscapes, there is some software that is very helpful; for example, Starry Landscape Stacker for Mac is also quite east, to begin with.

First thing – find a dark spot that has little light pollution. The darker, the better. If you don’t know the area, it’s easier to find it when it’s still light outside. Think of how you want to compose the image. Large water surfaces could make striking results when the stars reflect in the water.

It’s almost all about collecting light, which is important: You want to have a high signal-to-noise ratio; this increases the quality of the image and helps you reduce noise. This is one reason why we use stacking techniques.

ISO is probably the most misunderstood concept in astrophotography.

First: The ISO-setting is not influencing your camera’s sensitivity to light!

The ISO-setting is determining the amplification factor that your camera applies to the photons that hit the sensor; it does NOT, however, make the sensor more sensitive, so it collects more photons. I will not go into the details, but this article is very informative.

To have a brief understanding of this and the concept of Signal-to-Noise ratio is important however, when you should decide the ISO-setting for your camera because it will affect the dynamic range:

“The best ISO for astrophotography for any DSLR is the lowest ISO level from which either a.) the upstream noise swamps out the downstream noise OR b.) the amplification will be done digitally in the camera, whatever value of both is the lowest.”

Or, to be concise: The best ISO for astrophotography depends on your camera. Here are some guidelines for Nikon, Canon, and Sony-users.

As we all know, the earth rotates around its axis once per 23 hours and 56 minutes. That has significant consequences for starscape photography as you will get star trailing in your images after just a few seconds, depending on the focal length of your lens.

400-rule: The 400-rule is a method that helps you decide when there is a risk for star trailing. Simply divide the focal length of your lens by 400 and get the maximum exposure time you can use before star trailing occurs.

A star tracker has its clock drive and is a simplified equatorial mount that makes it possible to use longer shutter speeds. With a good polar alignment, probably up to maybe 1-2 minutes.

There are pros and cons to both methods:

+ The postprocessing is a little bit easier. Starry Landscape Stacker is a very useful software. 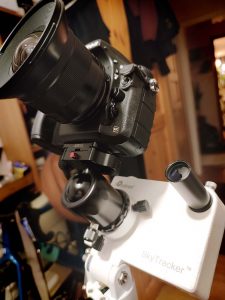 Integration time is the total exposure time. With a longer total integration time, you will get a higher Signal-to-Noise-Ratio (SNR) and hence reduce noise and increase the light information from faint stars. How long depends on the situation, but I would recommend beginning with at least 5-10 minutes for the night sky.

We use cookies on our website to give you the most relevant experience by remembering your preferences and repeat visits. By clicking “Accept All”, you consent to the use of ALL the cookies. However, you may visit "Cookie Settings" to provide a controlled consent.
Cookie SettingsAccept All
Manage consent

This website uses cookies to improve your experience while you navigate through the website. Out of these, the cookies that are categorized as necessary are stored on your browser as they are essential for the working of basic functionalities of the website. We also use third-party cookies that help us analyze and understand how you use this website. These cookies will be stored in your browser only with your consent. You also have the option to opt-out of these cookies. But opting out of some of these cookies may affect your browsing experience.
Necessary Always Enabled
Necessary cookies are absolutely essential for the website to function properly. This category only includes cookies that ensures basic functionalities and security features of the website. These cookies do not store any personal information.
Non-necessary
Any cookies that may not be particularly necessary for the website to function and is used specifically to collect user personal data via analytics, ads, other embedded contents are termed as non-necessary cookies. It is mandatory to procure user consent prior to running these cookies on your website.
SAVE & ACCEPT